This is dedicated to a girl who is so strong and courageous. She’s one toughie I tell ya! Even a week before her surgery, she climbed the grouse grind, did regular hot yoga sessions, jogged every day, studied for her exams and somehow managed to also throw in a social life. WOW! This girl even wanted to go to class after her operation! She is most notorious for overloading her plate, overwhelming her capacity and overachieving everything she sets herself to do! That’s my Jinnie! 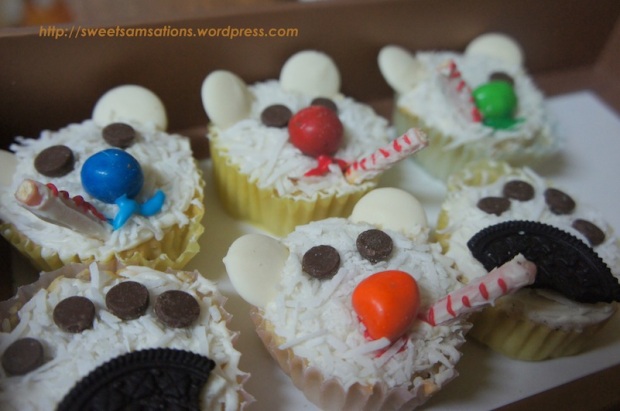 I decided to make Jinnie some “Get well soon” cupcakes, hoping they might cheer her up and keep her company while she’s in the hospital. I decided on making teddy bear cupcakes. In a way, the teddy bear to me is a symbol of care, patience and companionship. Just like how a little girl would see it in her teddy bear as she hugs it to sleep.

I decided to go with Vanilla Cupcakes slightly modified from All About Cupcakes. Then made the bears with shredded coconut! (Jinnie’s fav)

Beat the egg and the thickened cream.

Add the vanilla essence and sugar and beat.

Combine with baking soda and flour. Stir until blended. If you find your batter too thick, add 1/2 tbsp of water.

Stand in trays for 5 minutes before decorating.

I am also submitting this post to Aspiring Bakers #13: Enjoy Cupcakes! hosted by Min of Min’s Blog

This is one of the easiest cupcake recipe I’ve ever made! I will definitely attempt it again. One change for my next attempt though would be to beat with lower speeds. I found that my cupcakes shrunk slightly and became wrinkly on the top after letting it cool. The recipe indicated about 4 minutes of beating! As we know, overbeating can create a lot of air bubbles and hence compress the cupcake structure after. It didn’t matter too much this time anyway because I was going to decorate the top.

I applied some white frosting on first then added on shredded coconut to create the fuzzy bear fur texture. 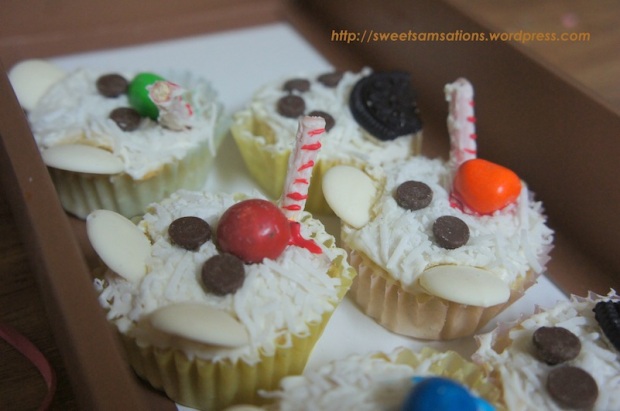 Similarly apply the white frosting first and then the grated coconut.

All you need for the paws are just 4 chocolate chips and a piece of Oreo Cookie! A lot easier eh…

← Halloween Spiders!
Have a Break, Have a Kit Kat Cake! →