Once upon a time, there was a girl named Sam who disliked food. When she was little, she would rebelliously run around during meal times, defying any food on her plate. Things began to change when Sam left Singapore and went to The University of British Columbia in Vancouver. Forced to cook, Sam was mostly unsuccessful in the kitchen and nothing was quite edible. A sudden appreciation of food then began to take form. However, as a starving student, Sam could not afford to be picky. She became very open-minded about food, which was excellent for a someone living in the global city. Sam tried different ethnic cuisines and ventured on unfamiliar names on every menu. This experience with exotic foods had fostered a versatile and diverse palette for various cuisines. A passion began to develop and sooner than she realized, she lived to eat!

A year after her graduation, Sam had the idea of creating some cookie monster cupcakes one fine day. It was her first time ever making cupcakes and it sure was a challenge for her. Of course she had to get some help from Ms. Betty Crocker. The cupcakes turned out to be a success (how can you fail from Betty Crocker?). Ever since then, she was hooked. She never knew how much joy baking could bring to both herself and to those around her. The baking had since continued and alas, Sweet Samsations was born!

Hello and welcome all! My name is Samantha and please make yourself comfortable here! I am of Singaporean and Indonesian heritage, but have also lived in Vancouver, B.C. for 7 years.

What can I say? I simply love food and probably have more pictures of food than I have of people. This blog has evolved according to the many stages I’ve had with my relationship with food. At the present, I’m focusing on healthy, wholesome food that I can have every day.

Thank you all for your support! If you have any questions or enquiries, please contact me at samsumarli@gmail.com

Food Trending: What readers are snapping and eating

How to Make Spider Cupcakes 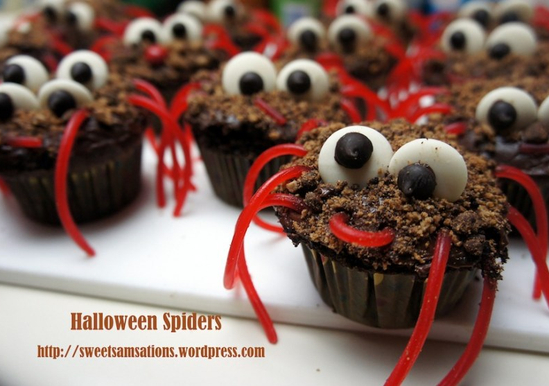