Besides the candies and costumes, another reason for my love of Halloween is the fact that it happens during pumpkin season!!! Alright, I gotta admit, I was NEVER a fan of pumpkins. Say the word “pumpkin” and I’ll run. It wasn’t until last year that I discovered the wonders of pumpkin desserts when I made my first pumpkin cheesecake! Since then I got hooked on everything and anything pumpkin. 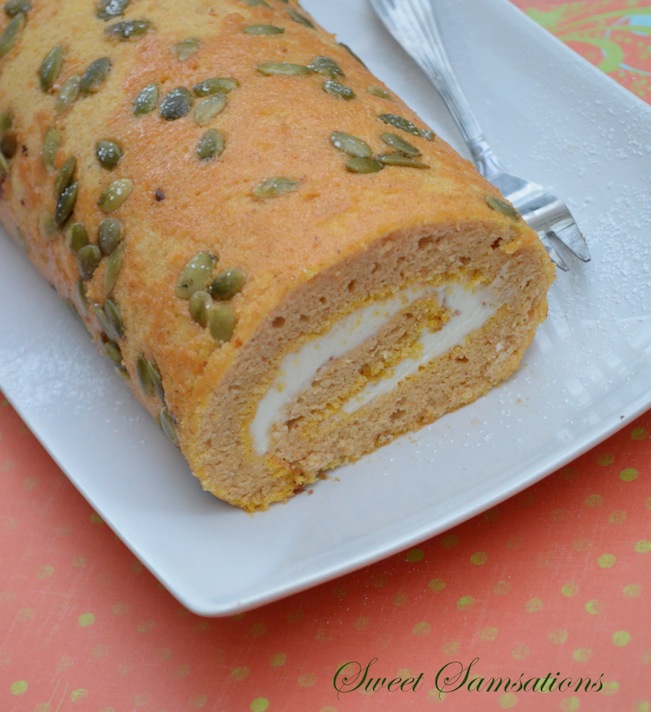 One of my besties, Jin, mentioned how she was in looove with a said pumpkin roll. Well, whenever anyone gives a rave review about a dessert and then proceeds to hand me the recipe, I find it rather hard to resist trying! 😀

The recipe Jin gave me was originally the Libby’s Pumpkin Roll recipe found at the back of the can label. Although the cake turned out “okay” and I didn’t have any problems with a rolling it up, I didn’t quite enjoy the texture of the roll as I found it to be more similar to that of a quick bread than that of a cake. It lacked the softness and sponginess of a cake. Upon further inspection of the recipe, I noticed the absence of oil / butter!

Although in North America, we usually call these cakes “cake rolls” or “jelly rolls”, in most Chinese bakeries, the rolls are known as “Swiss Rolls”. They’re usually cotton soft and really fluffy, often employing the separate eggs “chiffon” method. And that’s how I wanted my pumpkin roll to turn out! I didn’t want to alter the recipe too much since I was afraid of the cake cracking upon rolling it up. After experimenting with the recipe though, I realized that although my cake DID turn out a lot softer with the “chiffon” method, it also cracked upon the roll up. I realized that the cake had became too thick to roll without cracking. Thus, I decided to try omitting the baking powder / soda, and hey whatdya know!!  😀 😀 😀 I’m guessing you could also add more eggs OR reduce the batter added to the pan to ensure a thinner cake. But I’ll stick with this recipe for now since it turned out wonderfully! 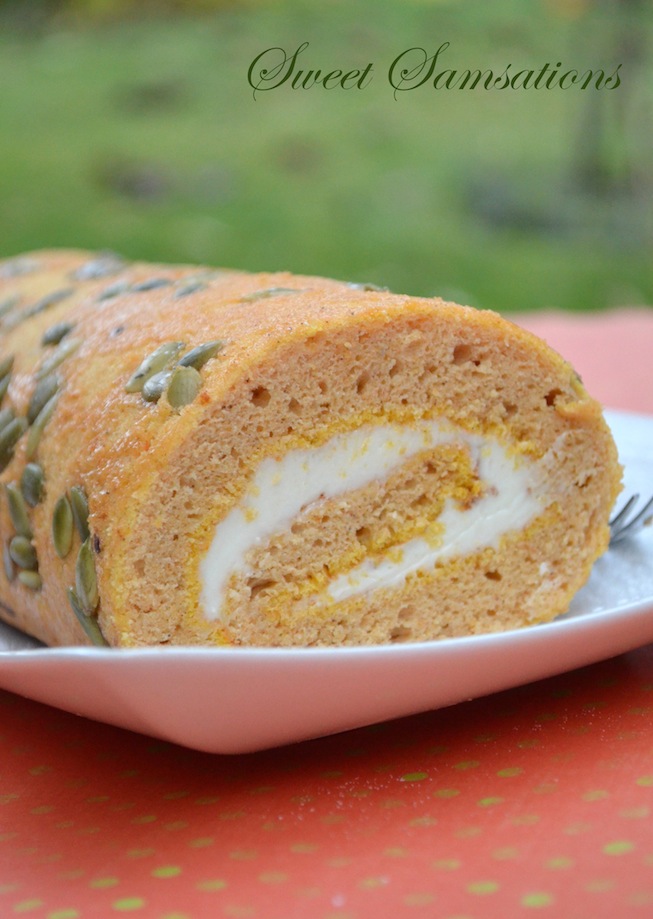 FILLING
I halved the original as there was just waaaaaay too much filling. This would be just the perfect portion

FOR FILLING:
BEAT cream cheese, powdered sugar, butter and vanilla extract in small mixer bowl until smooth. Carefully unroll cake. Ensure that the cake has been cooled at this point. Spread cream cheese mixture over cake. Reroll cake. Wrap in plastic wrap and refrigerate at least one hour. Sprinkle with powdered sugar before serving, if desired. 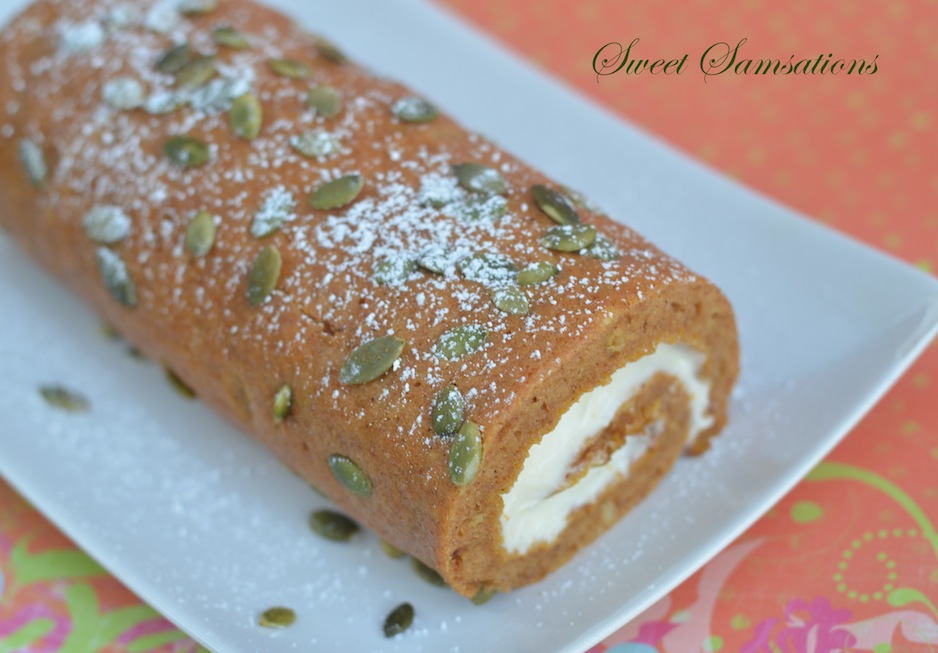 Success!! Honestly the “rolling” stage has always been the most stressful aspect for me. And it really pains my heart to see the cake crack because you know there’s no turning back once that happens! Good thing this did not take up too much time!

So there ya go! A soft and fluffy Pumpkin Swiss Roll!

I did some pumpkin carving for the first time in my life! It was definitely quite a bit of work but was super fun anyway 🙂 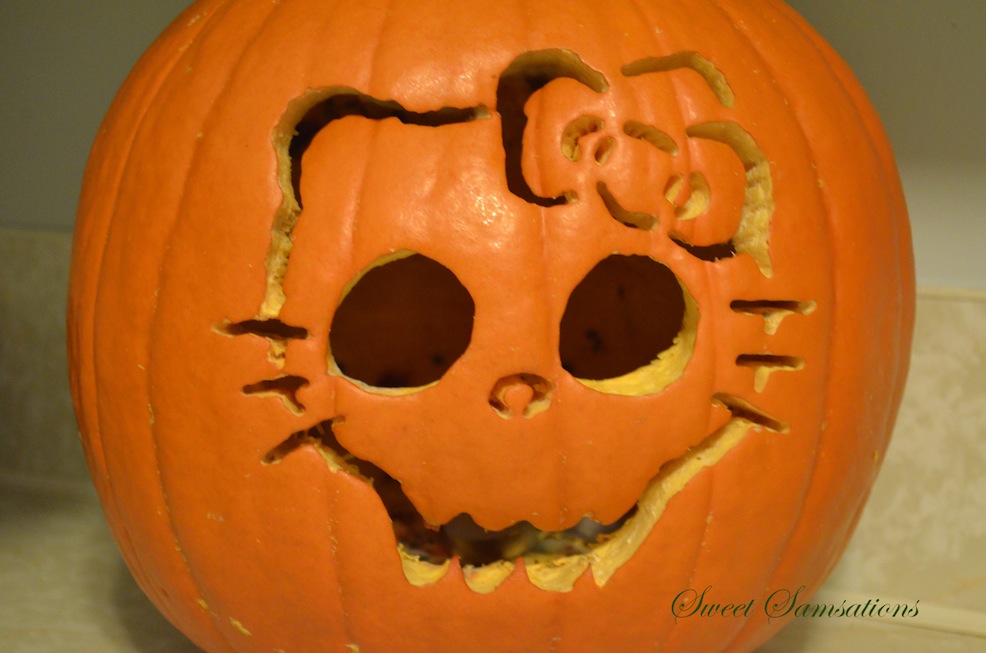 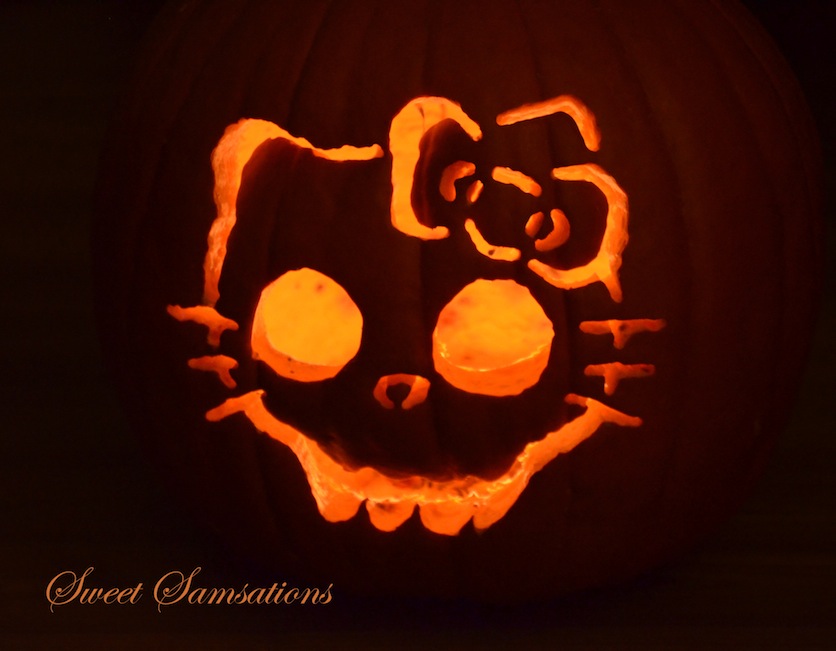 If you’re interested in seeing what I made last year, please see….

I pray for those located close to where the cyclone Sandy had taken its toll. Hopefully you and your families stay safe!!!! ❤ Especially my blogger friends there! I will be reading updates!