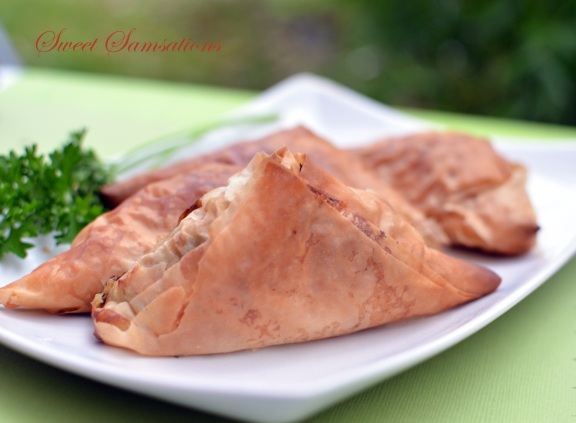 If you’ve been following Sweet Samsations, you would have read countless rants regarding my moves. I have moved twice this year, and both moves have been within the same proximity. This time though, I threw my hands up to fate as I moved across continents. After 7 years in Vancouver, I finally moved back to Singapore, my home country; which would explain my short absence in blogging.

At the back of my mind, I knew I would some day eventually move back to Asia. But unbeknownst to the conscious and rational areas of my brain, I never imagined myself to have grown so attached to my lifestyle in Vancouver. We’re all creatures of habits and it is only natural that we have become so comfortable and accustomed to our daily routines.

There’s so many things I already miss about Vancouver; my daily yoga routine, the wide and global restaurant selection, the fresh minty air, the friendliness, my absolute freedom, the nightlife, my multiple jobs, my coworkers, my friends, my kitchen, the grocery stores and all my pantry…. I’d have to say though, that the hardest thing about leaving Vancouver is undoubtedly to leave the people behind. In this short 7 years, I’ve made the best friends one can ever have. Besides my dear sister, I have been without family in Vancouver and my best friends filled that void. They’re most amazing and precious, and they’ve become family. 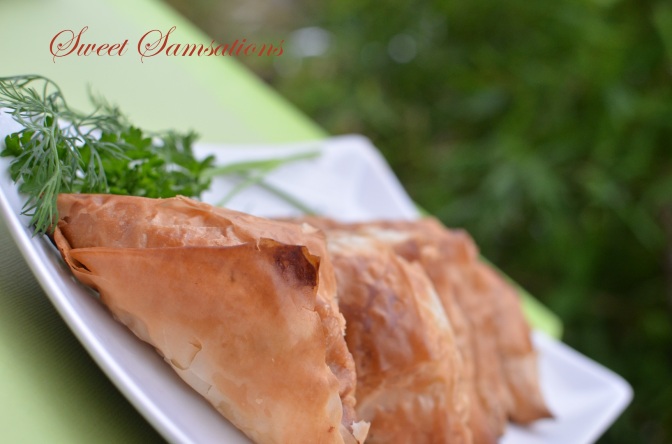 Currently, I’m being thrown into one big fit of nostalgia as I adjust to life in Asia. What can I say? Life often hands you curve balls and you just gotta deal with it. It will take some time, and hopefully I can happily embrace the changes, be it positive or negative. As much as we may be creatures of habits, we can still be adaptable to changes. 7 years ago, I never wanted to leave my nest in Singapore. Looking back now, coming out of my comfort zone was the best life decision I had ever made.

Up to this point, my heart is still left behind in Vancouver. It’s been deeply etched in some imaginary Canadian root. I find myself emotionally eating the idea of returning there and once again continuing to enjoy beautiful British Columbia. Well, speaking of eating and good restaurants, let’s take a look at one of Vancouver’s diners “Neighbours”.

I’ve been meaning to visit this diner since it was conveniently located just minutes away from my house. When I saw another episode of “You Gotta Eat Here” hosted by John Cattuci, I was convinced that I had to eat there. It instantly found its place on my bucket list of “Things to Do Before Leaving Vancouver”.

So, a little bit about life in Vancouver and why I haven’t had too much time to blog. Here is a typical weekday schedule of mine 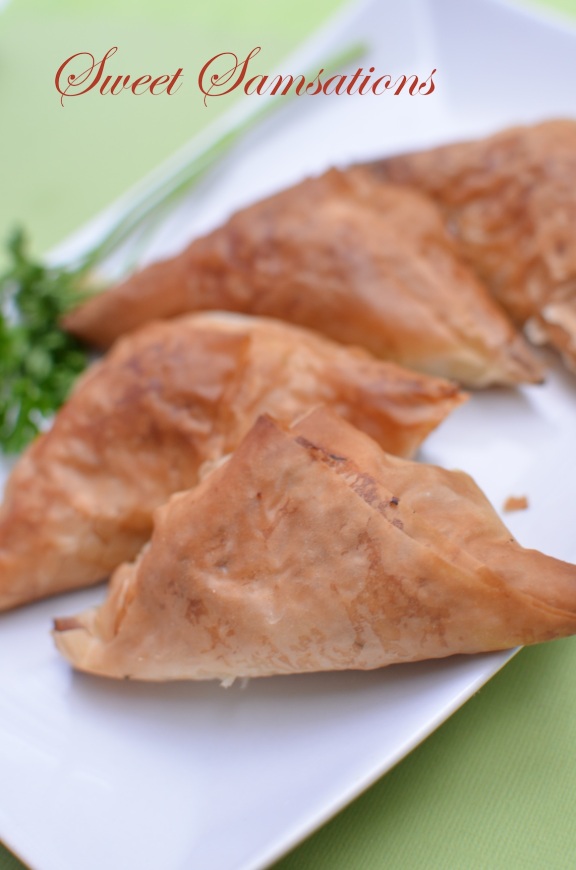 So yes, I typically wake up at 4.30am in the morning and so I prefer having my meals earlier as opposed to those late night dinners. Anyway, my girlfriend and I walked into Neighbour’s at a time where most people would consider odd – 4pm. Needless to say, it was relatively empty. The servers immediately greeted us with affection and gave a basic profile of the menu. I already knew I was getting their Spanakopita! As much as I was tempted to share the Roast Lamb or Pizza with girlfriend, I knew that she was not a fan of laaaaaambs, nor was she in the mood for pizza. We instead settled for their Chicken Parmesan, which was also highly recommended by our server.

The Chicken Parmesan came with a free salad. I’m not going to comment on the salad, because honestly they all taste the same to me and I hate salad. LOL. Yes, you heard me right! 😉

Spanakopita came next! It was pretty delicious! I could definitely taste dill in it! And boy, that feta cheese was just oozing in my mouth.

Chicken Parmesan was really amazing. We had ours with our choice of pasta instead of rice / potatoes. The pasta was great! Girlfriend and I cleaned up the plate in no time. I gotta say though, I was feeling excruciatingly dehydrated and thirsty after the meal. Another girlfriend said she thought it was kinda salty.

All in all, it was a great experience! I’ll definitely have to go back for the lamb and pizza some day

So anyway, of course I HAD to replicate the Spanakopita at home when I found the recipe generously provided by the owner on The Food Network. 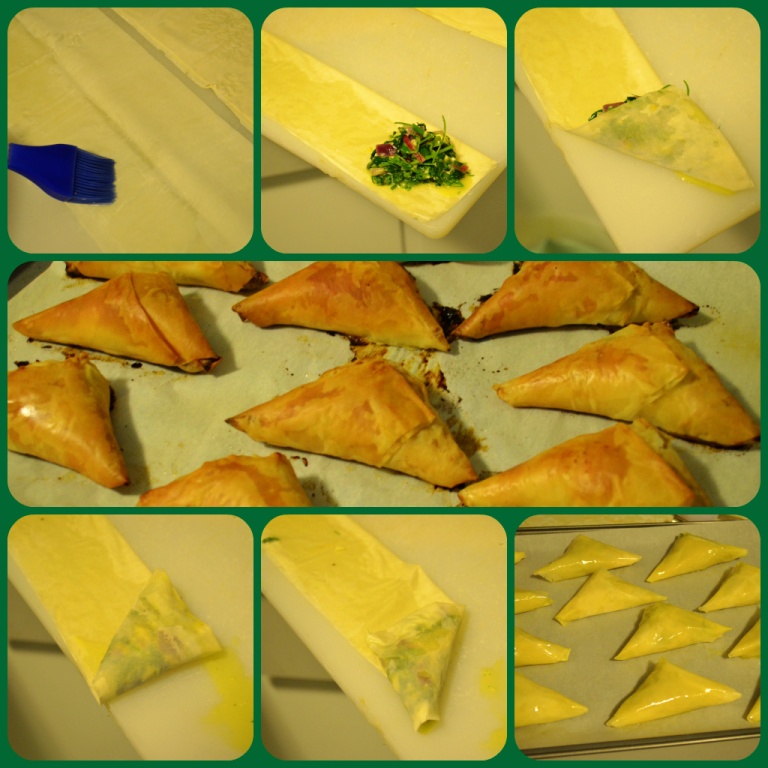 Alternatively, you can also instead make 2 big pans of Spanakopitas. For each pan, layer 6 phyllo pastry followed by half portion of the filling and another 6 phyllo pastry, brushing each layer with oil. Increase baking time to 50minutes – 1 hour. 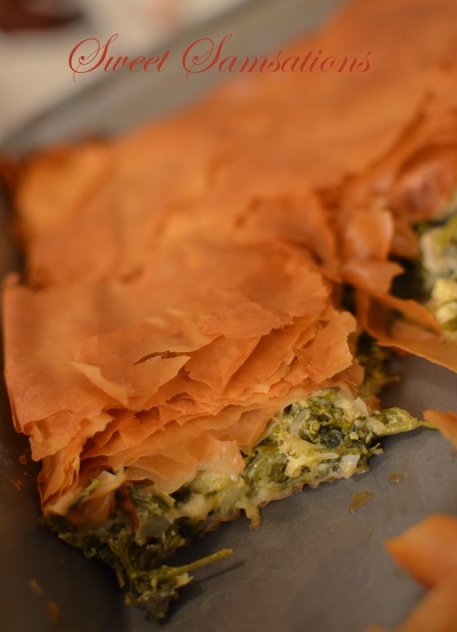 Yum yums! It tasted almost exactly like the one I had at the restaurant except that the taste of the dill wasn’t as strong. Personally I much preferred the individual pieces as compared to the large pan variation, although obviously making the pan took a much shorter time. 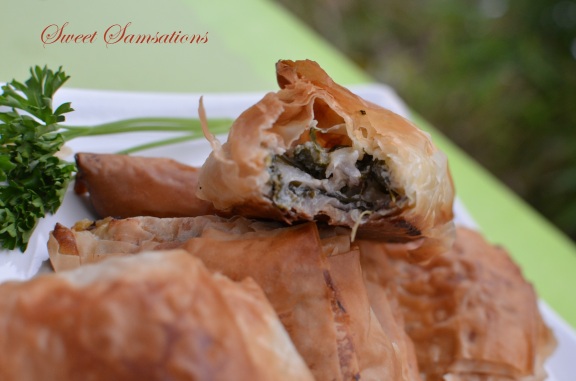 Anyway, my dear friends! I’m sure you noticed my new blog layout. I figured it would be a new beginning and change for Sweet Samsations. Enjoy! 🙂 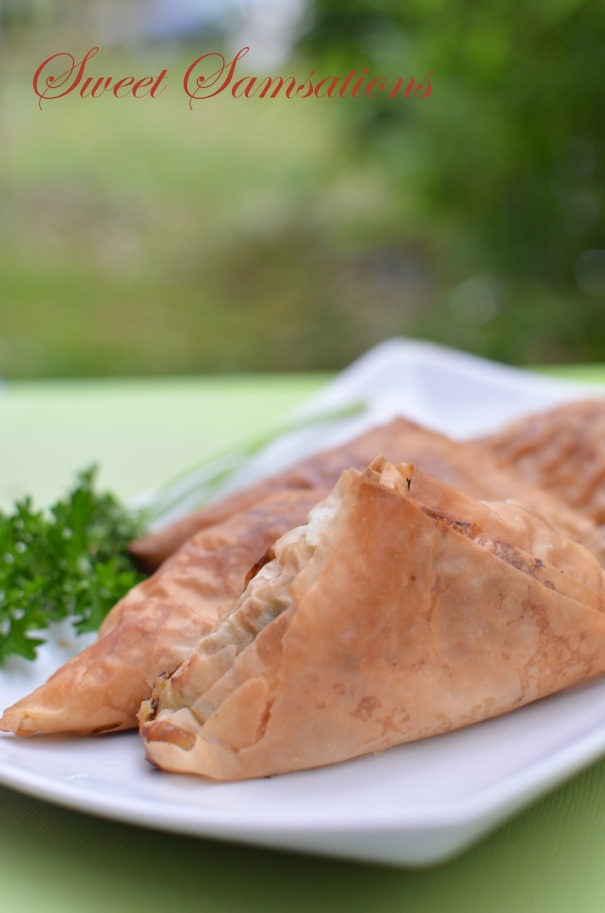