So, I’ve always been a fan of cassava cakes. Cassavas are cultivated in tropical and sub-tropical regions, and thus are very popular in Southeast Asia. It almost feels like cassava cakes have conquered a special place in the hearts of people living in the tropics. They go by many names and are usually made with coconut milk. In Singapore and Malaysia, cassava cakes are known as “Kuih Ubi Kayu”. In Indonesia, cheese is usually added to “Kue Singkong”. In Vietnam,  “Bánh khoai mì nướng” are almost always free of eggs! Fijian Cassava cakes are sometimes infused with mashed bananas. And the list could go on and on with the other tropical countries.

The one I’m going to post about today though, is the Filipino version which, in addition to coconut milk, usually also comprises of evaporated milk, condensed milk, shredded cheese and macapuno strings. As some of you know, I’m a big fan of Filipino cuisine and the Pinoy Cassava Cake is no exception! One of my favourite bloggers, Raymund, of Ang Sarap posted his mum’s Cassava Cake recipe. He called it the “soft and chewy” version. It instantly won my vote. Please also check out Ang Sarap, as Raymund takes you on a culinary journey around the world! His blog is especially rich with mouth-watering Filipino cuisines!!

UPDATE: I’ve made this recipe at least 6 times now because it’s so DELICIOUS that I’ve gotten several orders for it from my co-workers!! It’s definitely a MUST-TRY!!!

P.S. I find that this cake bakes best in aluminum foil pan instead of the regular non-stick bakeware coated with Teflon. Those disposable aluminum foil pans prevent the sides of the cake from being burnt. 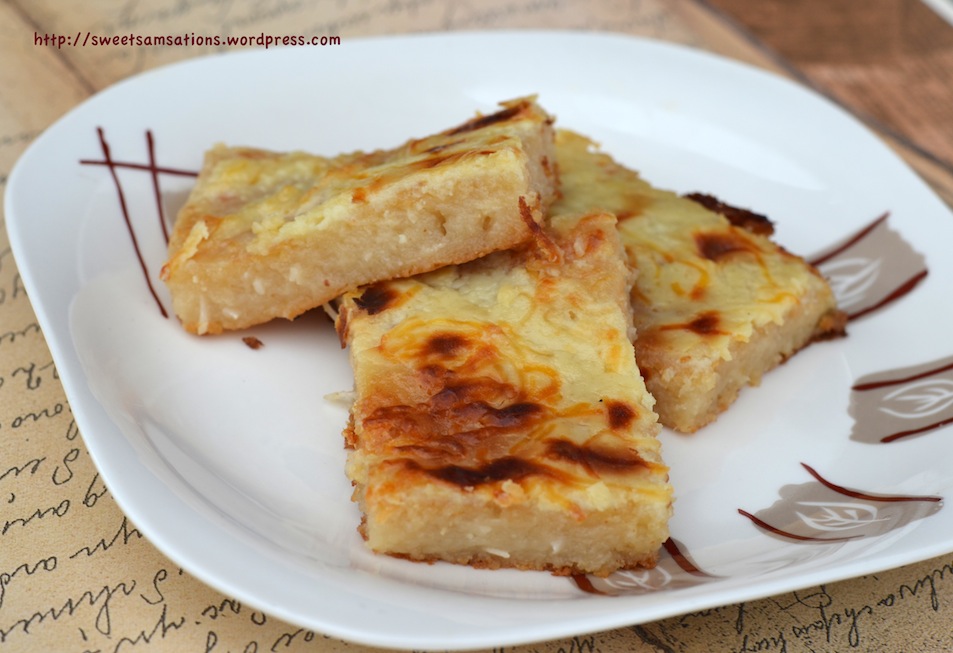 1. In a large mixing bowl, beat the egg and then combine the rest of the Cassava Cake ingredients; mix thoroughly until it is even in consistency.
2. Pour cassava mix in a 12×8 pan, then bake in a 180C preheated oven for 50-60 minutes. I baked mine for 60 minutes because I was a little paranoid about making sure the cassava was thoroughly cooked!
3. While the cake is in the oven, mix together topping ingredients until even in consistency. Cook in low heat until sauce thickens.
4. Remove cassava cake from oven then pour sauce on top, distribute evenly then place back in the oven and bake at 220C for 15 more minutes or until top turns golden brown.

Thanks Raymund!! The cake was sooo good I almost wanted to have the whole pan to myself! Of course I knew each slice was worth 90 minutes of hot yoga… But I couldn’t help but succumb to my mind’s imagination….

What if we mixed all these three together?? And of course add a dollop of fresh whipped cream in the middle?

This probably only took me about 5 minutes to make. hahaa… Oh and yes!! CHOCOLATE, BANANA AND CASSAVA GOES SOOOO WELL TOGETHER!! You will have to try this the next time you make a Cassava Cake!! 🙂

Perhaps I should try the Fijian Cassava Cake in the future, by blending it with bananas… mmmmmmm…

Haven’t been participating in Aspiring Bakers lately, so I thought this month, I’d do an early submission to Aspiring Bakers #21: Gluten-Free Bakes (July 2012) hosted by Hankerie.