Enjoyed for over half a century, the Red Velvet Cake has been popular to this day. There’s something about this New Yorker cake that we go head over heels for. In some cases, I do agree that the Red Velvet is an overrated chocolate cake with a lot of red dye. But nonetheless, how can you not love a cake made with thick buttermilk and rich cream cheese frosting? 😀

Here’s a picture of OLD Red Velvet Cake I had attempted last year but never got to blogging about it! 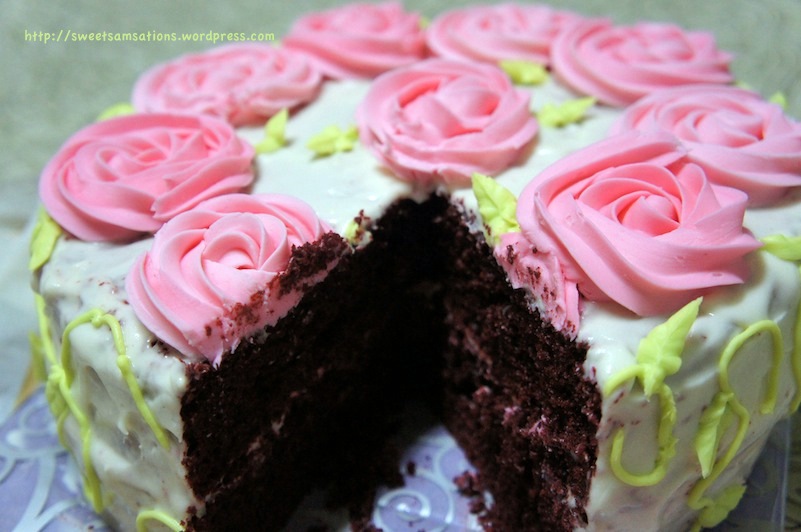 For my Singaporean / Malaysian readers, I would liken the Vancouver-Seattle trip to a Singapore-Malaysia trip. It is especially common for Vancouverites to head down just to get a car load full of groceries and to fill up on gas before driving back up. Who can resist 450g butter for only $3? Not to mention 450g Philadelphia cream cheese for under $5? I’m probably one of those guilty of buying at least 24 sticks of butter before returning to Vancouver. 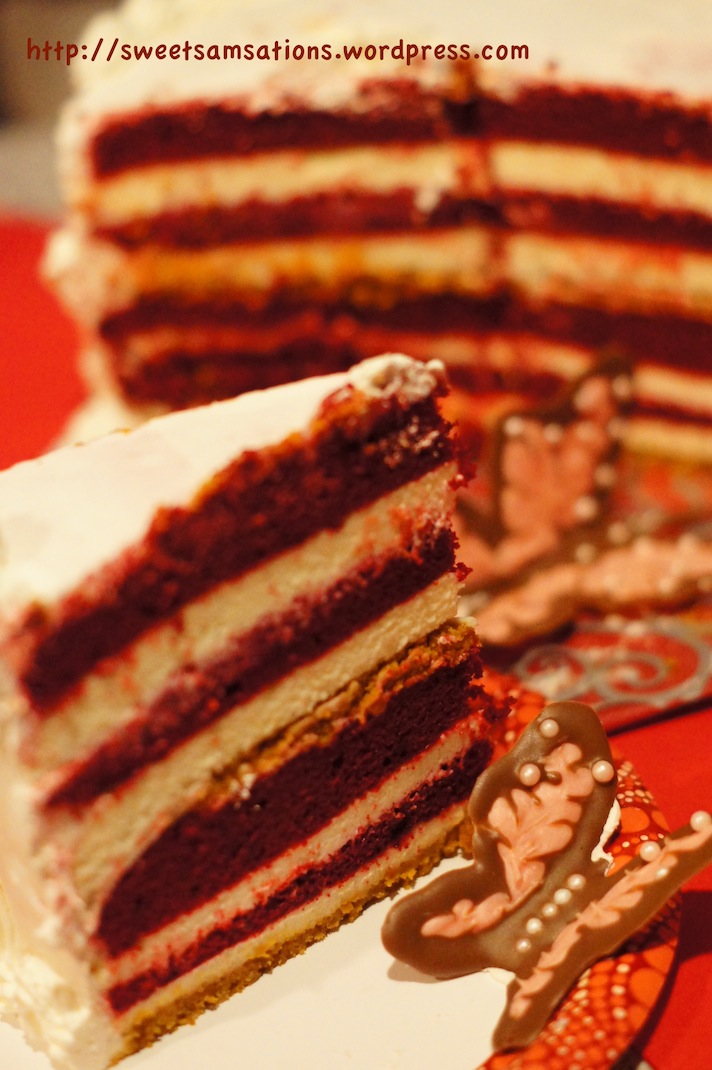 So anyways, it was Tracy‘s birthday!! I wanted to bake her a cake and knew she was a huge chocolate fan – specifically of the Red Velvet. Initially I wanted to layer it with cream cheese frosting, but fate had it that I saw a Cheesecake Factory plastic bag which led me to recall that “1500 calorie per slice” cake… mmm.. I vividly remember my first time biting into that decadent cake during a trip to San Fran. My thighs were screaming out to me, telling me to stop, but my hands couldn’t find the strength to resist.

This one was a Cookie Dough Cheesecake. It’s been 2 years now, but I remember the cookie dough cake not being as good as the following Red Velvet we had that same day.

I had such great memories of my SF trip 2 years ago!! But now it’s time to (attempt to) re-create this in my kitchen!

I wanted a really tall cake with thinner layers, and so decided to make it 8 layers instead! If you do decide to make this, please ensure that you have read all the instructions before you attempt. The cakes may be made in advance and layered the next day. I made my Red Velvet the night before, and left the rest for the next day. 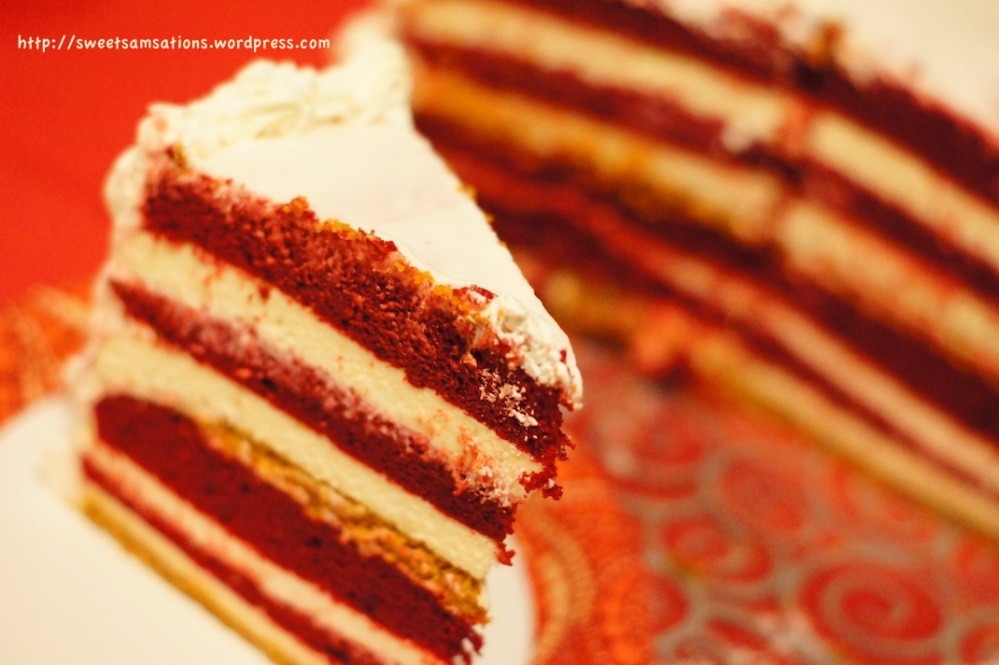 I didn’t want to use cream cheese frosting because the cake was already quite rich with cheesecake! Whipped cream frosting would provide subtler taste. 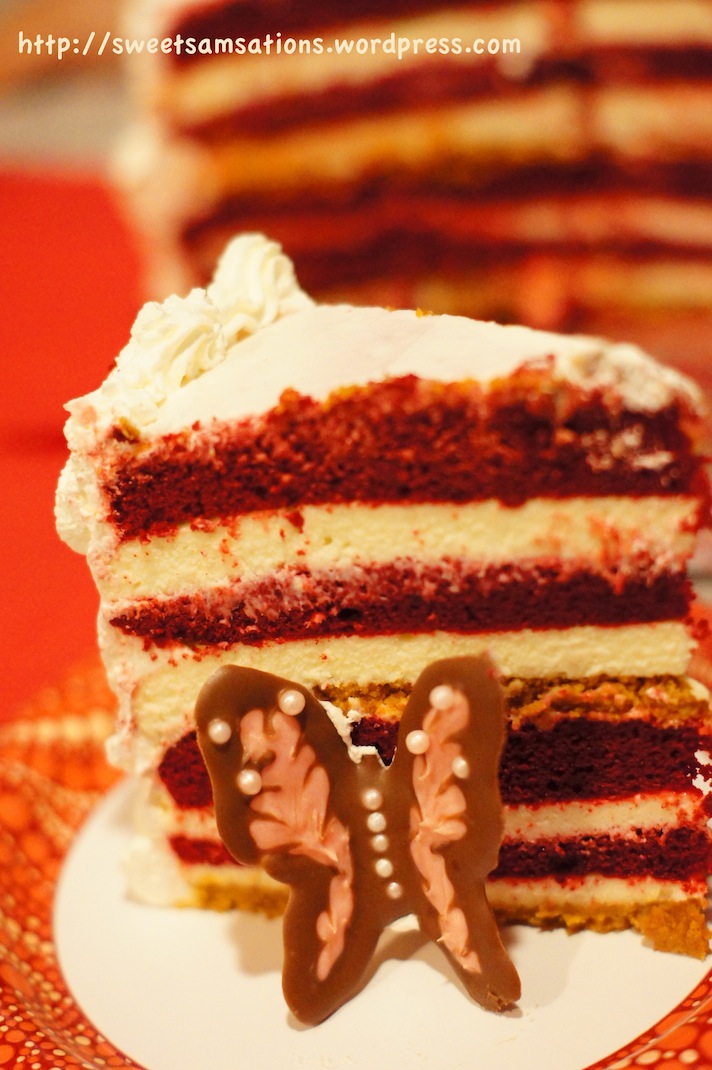 I thought this was a neat idea and wanted to use it for my cake! I used a slightly different method from the book though. 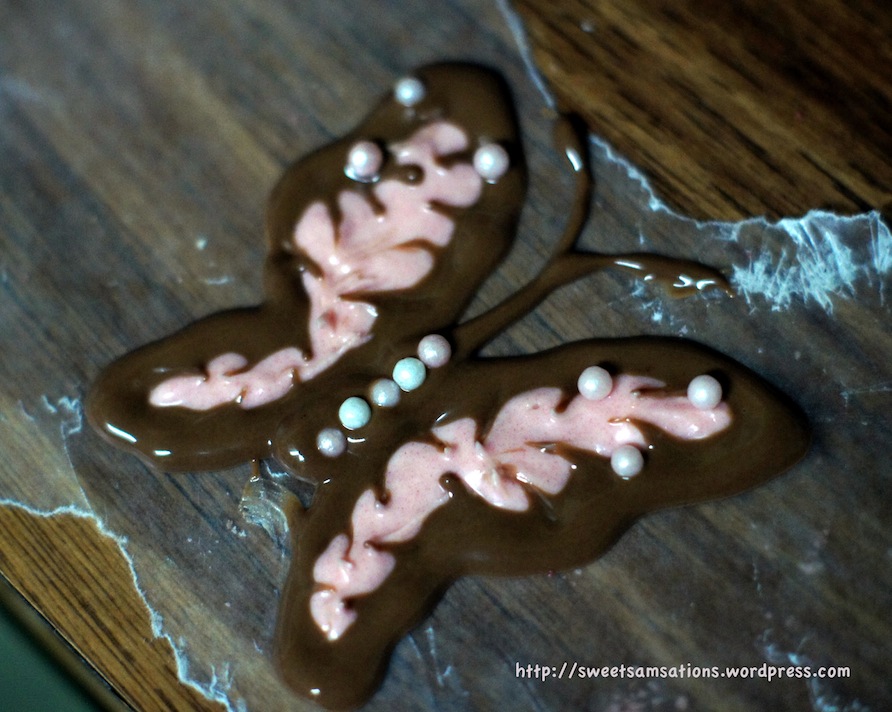 I double frosted the cake. My first layer of frosting was to keep the crumbs in. The second layer was to smoothen it. Since a lot of frosting was being used, the more subtle tasting whipped cream was a better choice compared to the traditional rich cream cheese frosting. 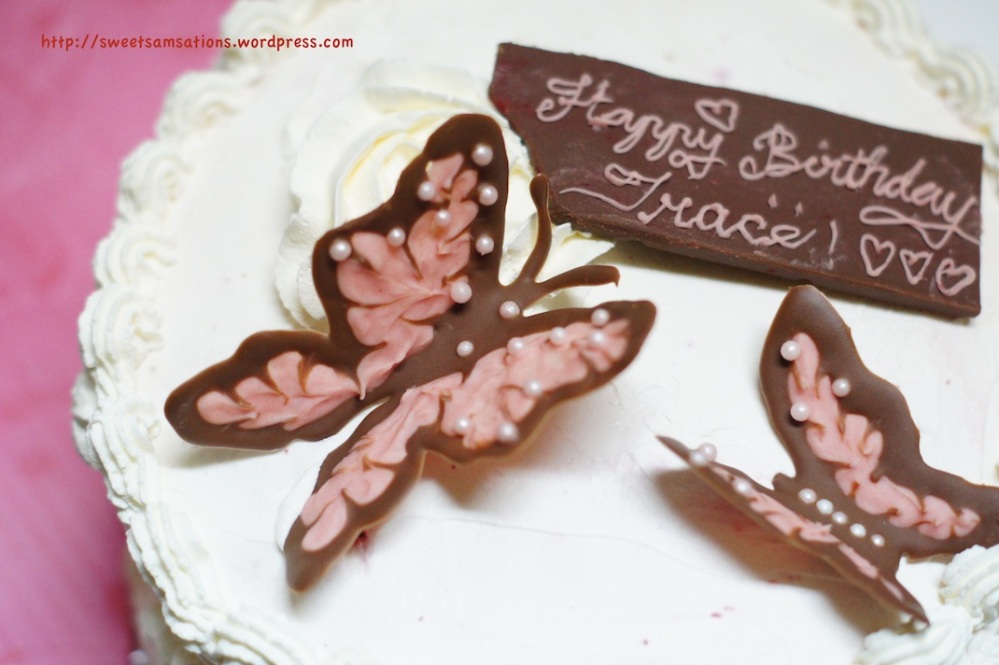 After frosting, I placed my butterflies and plaque on top. That “Happy Birthday Trace” probably took me about 45 minutes to finally get down! Writing with chocolate really wasn’t as easy as I thought! As you can see, one of my butterfly’s antennas fell off. haha.. I didn’t want to over-decorate the top since I already placed the butterflies there. Sometimes less is more right? 😀

Transporting the cake was sooooo scary. I didn’t have a box big enough to contain it! I placed the cake on a cake board I made and then in an opened container. During the car ride, I was holding on to the cake as if my life depended on it. Every sharp turn we took sent my heart to panic.

If you think this cake probably took up a lot of time, you thought right! It pretty much took me about 12 hours for the entire process, especially because I didn’t have enough pans to multi-task and didn’t exactly plan very well ahead!

Tracy and her guests enjoyed my cake! It was a gigantically tall cake though! So I reminded Tracy to cut smaller slices, since this was double the size of a regular cake!

It often worries me when I make birthday cakes. I can never know how it tastes before everyone else! Cupcakes are a different story because you can eat an extra one, but it’s not like you could cut yourself a slice of cake and then present the leftovers to the birthday girl! haha.. So what I like to do is to pour a little bit of batter onto a cupcake silicon before dividing the batter out on the pans. That way I get to eat a mini version of the cake. 😀

P.S. I’d like to apologize that the lighting / photography for this cake wasn’t the best! By the time the cake was completed, it was already getting dark – no natural lighting. This time, I didn’t get to stage and style at the comfort of my home either.

Although I was disappointed with my uneven layers, I’m glad this cake was a success! I loved the red velvet sponge cake! I thought the cheesecake was a little too rich though, but nevertheless complemented the red velvet quite well. I would try another cheesecake recipe in the future. But the red velvet was perfect! And of course, the butterflies got lots of compliments too! Everyone kept asking me how I made them. lol. 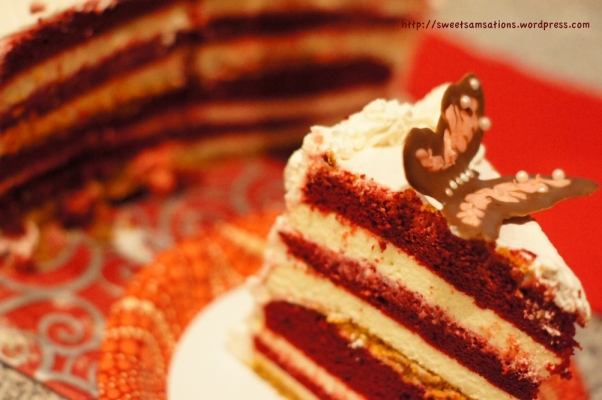 Alright!! That’s all for now! I’m also submitting this post to Aspiring Bakers #18: Layers of Love (April 2012), a “Layered Cake” event I’m hosting this month! Please check it out if you’d be interested in participating too!!